Git is a distributed version-control system for tracking changes in source code during software development. It is designed for coordinating work among programmers, but it can be used to track changes in any set of files. Its goals include speed, data integrity and support for distributed, non-linear workflows. Let’s see how to deploy splunk addons and apps using git.

The following diagram shows the workflow of the various processes between the local computer, git server and our deployment server. 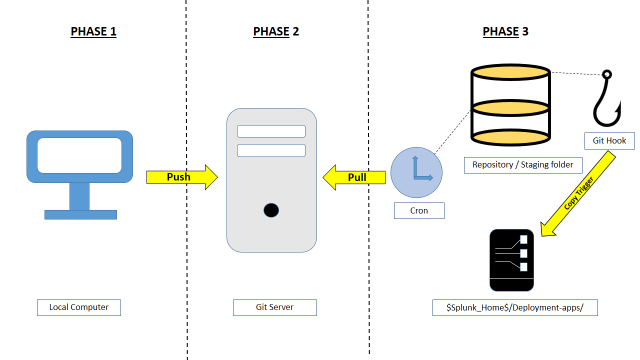 Phase 2: This is the phase that happens in the Git server.

Phase 3: This is the phase that happens in the Deployment Server.
If you are still facing issue regarding deploy splunk addons and apps using git Feel free to Ask Doubts in the Comment Box Below and Don’t Forget to Follow us on 👍 Social Networks, happy Splunking >😉